Traveling along
the Mycenaean landscape

The territory of the residential and cultural nucleus of Mycenae covers a part of the NE Peloponnese and specifically the mountainous area between the plains of Argos and Corinth. This large semi-mountainous zone had, for a very long time, a more intense residential, transport and productive value than we see today and in all historical periods was part of the adjacent imposing civilazitions of Corinth and Mycenae.

Considering that the fondamentals of a culture is the vital space in which it lives, harvests, travels and enjoys, we dare to call this unnamed area "Mycenae", giving the cultural term a geographical dimension. The Mycenae reagion is therefore the set of lowland and mountainous components that articulate between Mycenae and the multipolar grid of large villages and castles on the border of Corinth. This approach reflects a historical-geographical organization of the space, which is readable even in today's flows.

Argolis and Corinth is one of the most important dipoles in Greek history, as Corinth controls (if not represents itself) the key to the Peloponnese, and the Argolida region is characterized by a unique combination of land and sea elements, which give it not only a significant wealth but also a rare flexibility. Indeed, Argolis enjoys a complementarity of extensive mountain, farming and water resources with a wide range of sea outlets: these elements generated the Mycenaean miracle.

As in the other great bipole of Southern Greece, Athens and Thebes, so here there is a low but very long mountain range that separates Argolis from Corinth. Amorphous and fragmented, the mountain range does not have a single name: not offering a significant hinterland, the long range of these small mountains was read with its transverse rather than longitudinal geometry. Today it is known as the Nyfitsa (=Weasel) Mountains.

Nyfitsa mountain range has a pronounced wavy ridge, with many saddles and transverse valleys, which create an equal number of passages. These passages create the inescapable axes of communication and were identified from prehistoric times, remaining since then until today the main connections corridors between the Argolic and Corinthian world.

At a glance, the landscape of the Mycenaean territory resembles that of other semi-mountainous areas of Southern Greece. These are, after all, limestone massifs, with typical geomorphology of tectonic elevations, deeply eroded ravines and extensive rocky slopes.

What differentiates this area, however, is that despite the intense topography, which creates the feeling of mountain desolation, the overall altitude is small and therefore the climatic conditions differ slightly from those of the adjacent lowland fertile basins.

Overall, this area, which looks poor and unwelcoming, hides many resources and thus, without reaching the point of creating a real hinterland - no worthwhile settlement was formed inside the hills - offers many opportunities for production and temporary housing. In the terms of a traditional economy, this area is a security land, which complements crucially with arable land and livestock resources the lowland richness.

The main adversity of this inland zone, which apparently prevented permanent settlement, is the lack of water resources. Indeed, the springs are few in the area and even in cases where they had a stable supply, such as the Frandzis spring in Agionori, they simply supplemented the rain water collectors of the settlements. Today, large underground cisterns in Limnes, Prosymna, Agios Vassilios and elsewhere continue to support secondary neeeds, such as watering the domestic animals.

The issue of water resources of the region is developed in the chapter The water in the mycenaean landscape.

Hiking nowaday in the mycenaean landscape

The access of the scattered and remote natural resources of the wider territory of the Mycenaean economy was done through an endless network of paths, the most importan of which had been turned into dirt roads of that era, ie roads for light chariots. The mapping of these paths followed the recesses of the terrain and the smoother zones, without, however, hesitating to pass through more inaccessible zones when the gain of the distance was significant. From this network, survive only a few sections, demostrating the magnitude of the intensity of presence and activity in the mountainous landscape.

In the 20th century, in order to serve, in somewhat modern terms, the exploitation of the scattered agricultural and livestock resources of this mountainous region, it was necessary to build an extensive network of dirt roads. In addition, in the last decade, the crestline of Nyfitsa Mountains has been decorated with a series of wind turbines, which are also accessed by a system of roads. Of course, most important natural corridors, such as the Kontoporia Way, have long since been converted into major asphalt roads.

These interventions cut off the old path network, which of course had already lost their freshness, as the use of mountain fields had waned. Thus, today the cartography of the ancient roads of the area is rather difficult to be decrypted.

Nevertheless, and mainly thanks to the recent involvement of local groups, part of the old roads have been identified, cleaned and partly marked and can lead the visitor to a deeper reading of the landscape. The passage of Agios Vassilios, the mountain connection Klenia-Agionori, the traverse of the Hadrian's Aqueduct together with the livestock paths in Dervenakia and finally the gorge of Voukina, can be walked today with pleasure.

Around Mycenae, the visitor can wander along the famous Mycenaean road or study the unchanged Mycenaean landscape from the height of Agiolias Peak and the neighboring peak Prophitis Ilias Vaserka. 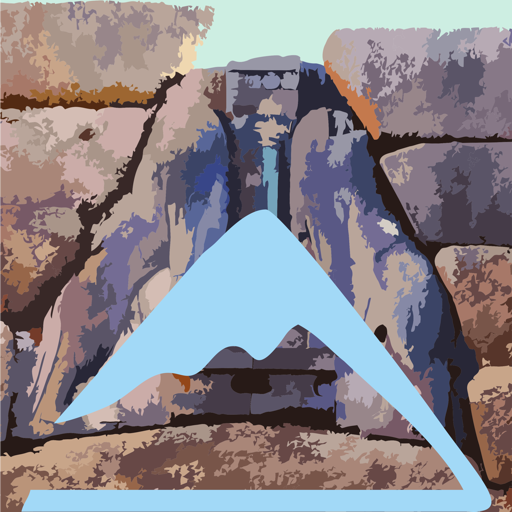 A GUIDE FOR THE TRAVELING
ALONG THE MYCENAEAN LANDSCAPE

A thorough presentation of the landscape, the nature, the cultural features and the hiking trails of the Mycenaean world is given in the guide Mycenae topoguide of AnaDigit.

It is very interesting that topoguide Greece has the ability to simultaneously display up to 15 different areas, thus allowing an overall view of the Peloponnese and the easy alternation of hundreds of hiking routes, hundreds of Points of Interest and dozens of pages of the guide with innumerable photos. 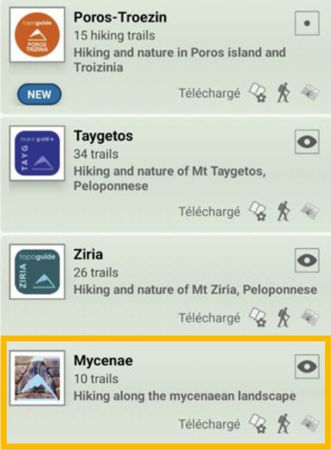